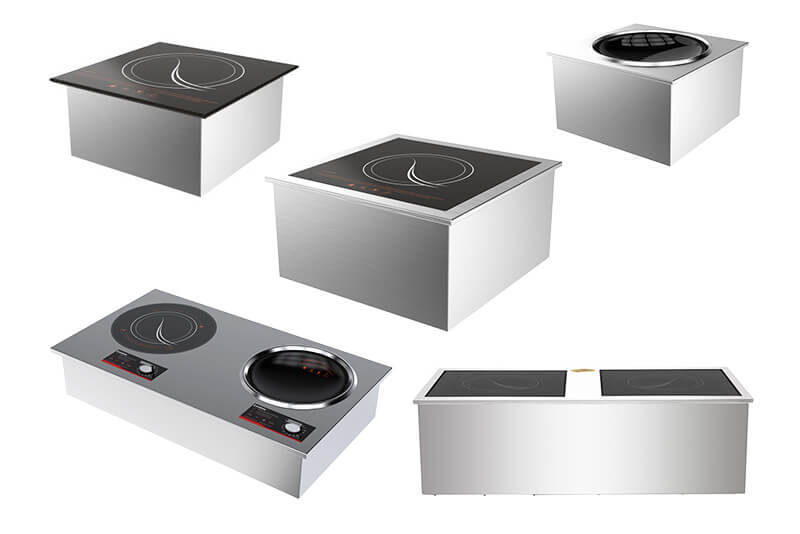 “My kitchen space is not big, but I hope it isn’t just for cooking. How can I achieve it?” Some restaurants often have such doubts. It sounds unlikely to be realized. In the end, you can only choose to expand the kitchen area or give up updating the induction cooker stove, but can these solve your problem?

The answer is no. We all know that more clothes can arrange in a storage box, so can kitchen utensils be put into the storage box? Yes, according to the latest induction built in stove developed by Lestov, the induction integrated cooker can wholly update without taking up too much kitchen space.

What is a built-in induction cooker?

A built-in induction stove refers to an induction hob plugin marble or other planes. Embedded type can keep the height of induction hobs and plane consistent, save the floor space and make the kitchen clean and ornamental.

For example, when you choose the plug in cooker as the central kitchen stove, you need to select the size of the plug-in induction cooker according to the size of the kitchen, which may cost you a little energy and expense in the early stage.

After installation, the induction built-in stove surrounds by the countertops, which achieves the perfect integration of countertops and stoves and the convenience of surface cooking.

The induction integrated cooker placed inside can make high use of space and occupy less memory.

In some open restaurants or exhibitions, which require on-site cooking, under counter induction cooker can perform the open cooking.

In this way, consumers can not only see the whole process but also enjoy a good reputation. Besides, open cooking is an attractive viewing activity, which can significantly stimulate customers’ desire for consumption.

Advantages of the drop in induction cookers

Why are induction plug in cookers so popular in commercial kitchens? There are several reasons for this. Let Lestov show you more information about the under-counter induction cooktop.

The Lestov built in induction cookers produces according to the product size provided by the user, and the final product can fit seamlessly with the tabletop, which is like being integrated with the tabletop, showing a smooth and smooth state as a whole.

However, kitchen utensils in the traditional kitchen are all placed on the countertop, which looks tiny and messy, affecting the kitchen’s neatness and cleanliness.

Lestov built in stove is consistent with other induction hobs in the working panel, function selection, and cooking mode.

You only need to put the pot on the corresponding working panel and press the start button to heat the food automatically. Surface cooking avoids the stir-frying and shaking of pots and pans and saves human labor and electricity.

In restaurants where children go in and out more often, parents may be worried about the safety of electricity consumption of kitchen utensils, and lively children may accidentally touch kitchen utensils or press function keys, which may cause operational errors, resulting in burns or electric shock.

This problem has been considered in the early research and development of Lestov. The integrated induction cooktop can be started and operated through the function is equipped with a remote controller with a wire length of 1.5m for bidirectional control, so you can put the remote controller at a higher position, such as the counter, to prevent children from contracting.

While you were busy frying steak, a customer placed a new order for black pepper chicken fillet pasta. Which would you choose to do first? Or hire another person to make it at the same time? This entanglement is unnecessary. integrated induction cooktop equipped with an LCD timer.

You can set the cooking time from 0-180 minutes, and it will automatically turn off when it reaches the point. Even if multiple orders are cooked at the same time, one person can handle it completely.

The integrated induction cooktop panel is made of integrated ceramic glass, an easy-to-clean glass stove surface.

After a busy day, you can quickly remove the oil stain by wiping it lightly with a rag. Oil stains are not easy to remain on the glass-ceramics. After tapping, the panel still shines as new.

“I think there are both plug-in cooker and countertop induction hobs in my kitchen. Can this be realized in one purchase?” It is a typical user consultation on Lestov’s official website.

The answer is yes. When purchasing a built in induction cooker, it will be equipped with corresponding countertop induction hobs, genuinely realizing the perfect combination of built-in and desktop in the kitchen.

Disadvantages of the embedded induction cookers

Before you choose to buy a plug-in induction cooktop, you can read the following contents before deciding.

As mentioned earlier, the difference between a built in stoves and other induction hobs is that it needs to have specific space and installation requirements.

For example, it is necessary to select the counter incision matched with Lestov, which will cost you some expenses and energy when embedding the induction cooker into the countertop in the early stage.

The induction cooker is embedded, which can help you save space and finishing costs in daily use.

Plug-in cooker and hob are similar to placing induction hobs in a closed carton. Except for 95% of the heat energy generated in the cooking process directly acts on the heated food, the remaining 5% will discharge by the fan inside the movement.

Therefore, a built in griddle cooktop has specific requirements for heat dissipation. Usually, there will be heat dissipation vents at the furnace side to help dissipate heat.

During installation, the furnace body and the tabletop should keep at a certain distance to avoid objects blocking the discharge of heat energy.

Can the round wok be used in the gas stove be used on the built in induction cooker? Before answering this question, we need to talk about the working principle of the induction cooker.

The induction cooker generates heat energy by forming an alternating magnetic field in the coil and interacting with a magnetic range.

Based on this, it can be known that the induction cooker can generate heat energy only when it is used with a magnetic field. Otherwise, it will not work.

Because the specific heating position of the induction cooker is marked with a solid circle on the panel. Because only the bottom of the round frying pan contacts the panel, the absorption rate of heat energy is less than that of the flat frying pan, so it is not suitable for the induction plug-in cooker.

A built in induction cooktop is mainly suitable for commercial kitchens. The electrical requirements of integrated cookers and hobs are 220-240V, and the minimum rated power is 3.5kw.

In an induction cooker hob, it is generally between 1.6 kW and 2.2 kW. If you use an induction plug in cooker at home, it will easily cause circuit failure and cause certain dangers.

An under-counter stove will be a popular choice for kitchen utensils in open commercial kitchens. Whether based on space-saving, product advantages, or kitchen utensils renewal requirements and a built-in induction cooker will be one of the products you can consider.

Why do chefs like gas stove more than commercial induction cookers?

Chefs have long been prejudiced against commercial induction cookers, believing that gas cooktops are the…

Global demand for commercial induction cooktops to increase dramatically in 2021