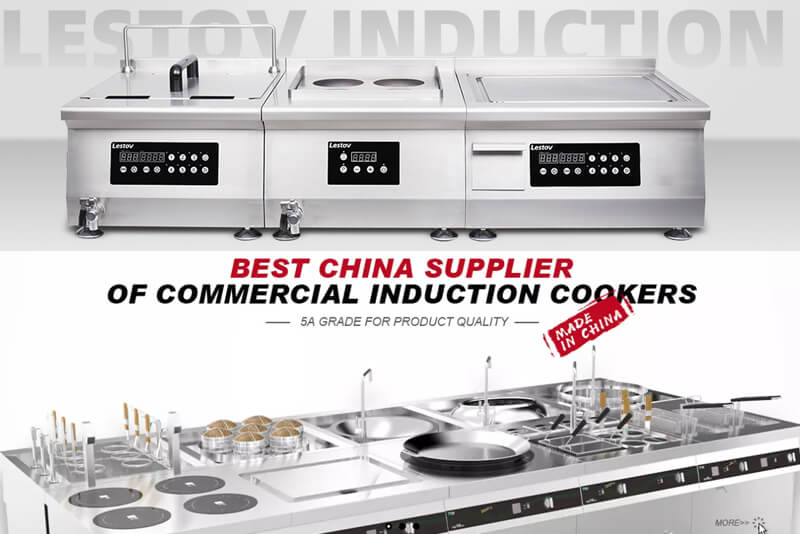 With the increasing demand for low-carbon and electrification, propaganda similar to “Induction cooking is safer, cleaner, healthier and better for the earth” began to appear. Switching to electric heating and induction cooking technology can indeed bring huge air quality benefits because some countries or regions in the Americas have already started operations. According to the National Kitchen and Bath Association, the induction omen has become a trend in kitchen design: induction is the preferred stove, defeating natural gas and traditional electricity.

What is the principle of commercial electromagnetic cooking?

At present, the commercial induction cooker on the Chinese market is a redesigned and improved product based on the principle of household induction cooker, which solves the problem of insufficient cooking power. The rated power of a single commercial electromagnetic device ranges from 3500w to 45kw.

Its working principle is still based on the electromagnetic principle. After inputting the power, the circuit board system of the IGBT module will output a high-frequency alternating current. Alternating current passing through a large electromagnetic coil will generate a high-frequency strong magnetic field. After the magnetic field is in contact with the induction cookware, the rapid movement of the molecules inside the cookware will generate eddy currents and generate resistance to each other, thereby generating heat without an open flame.

Higher peak power means faster cooking or heating. In commercial places such as restaurants, hotels, canteens, cruise ships, food trucks, etc. (especially those that can use three-phase electricity), the induction method is not to pre-cook and serve dishes, but to help these commercial places improve their competitiveness.

Compared with gas stoves, how safe are commercial induction cookers?

Due to the avoidance of combustion and gas lines, induction cookers are inherently safer than gas cookers. The simplest test is to put a piece of paper on the cooktop to boil water without causing a fire. Because the heating element does not dissipate heat unless it passes through a suitable metal, the area around the stove is always kept cool; moreover, because there is no open flame, accidental burns can be prevented. This is the simplest answer to the safety of desktop commercial induction cookers.

Are commercial induction cookers more energy efficient than other stoves?

This is an issue related to power consumption and energy efficiency.

Let’s look at the power consumption data from India. Taking into account the basic situation data of different fuels and cooking systems, the price of available heat (per rupee) and the comparative cost of cooking are estimated.

The following table (Comparative cost of cooking, when the electricity cost is taken Rs.3/kwh):

Let’s take a look at the energy-saving report of the induction cooker from Wanjiang Public Security Bureau of Dongguan City (unit price of electricity: 1 yuan/kw; unit price of gas: 8 yuan/kg).

What are the types of commercial induction cookers?

The range of applications for truly “commercial” induction cookers has become wider. As one manufacturer (Lestov factory) said: “As technology becomes more affordable and the functions of electronic products continue to evolve, you will see high-power induction cooking applications-for high-volume, rapid-production commercial or Industrial-grade venues.”

Chinese commercial induction cooker manufacturers consider almost all cooking methods, such as searing, stir-frying, frying, roasting, baking, boiling, slow simmering, steaming, stewing, braising, etc. These cooking skills can be subdivided or combined through the function of commercial electromagnetic equipment so that chefs can be trained to obtain excellent results in cooking.

In order to meet the needs of the size of the kitchen space, you can choose between movable tabletop induction cookers, a built-in cooker, and a freestanding cooker.

Each category of stove has different rated power options. The mainstream power of commercial induction cookers on the market is 3.5kw, 5kw, 8kw, and 12kw. There are also high powerful stoves (15/18/20/25/30/35/40/45kw) are used for special purposes, such as large restaurants, factory canteens, industrial applications, etc.

By combining devices with different functions and powers, the advantages of the kitchen can be maximized.

The commercial induction cooker is much higher than the competitor gas stove in terms of energy consumption, efficiency, cooking speed, all-around safety, and ease of use.

All these factors add up to make them an environmentally friendly, money-saving device because they have a very low energy footprint (no waste heat, cool kitchens) and greatly reduce our utility consumption. Commercial induction cooker is the most competitive and increasingly valued product in future commercial kitchens.

This is indeed a big disadvantage, although the price has dropped a bit. If you can think that the service life of a high-quality induction cooker can reach more than 8 years, and see the benefits of energy-saving in long-term use, then you may not regret the original decision.

(2) If the power supply is interrupted, the electromagnetic equipment cannot be used.

For areas with underdeveloped or unstable electricity or high electricity bills, this is the most deadly factor affecting commercial induction cookers.

High power and large size are some of the reasons that electromagnetic technology has not gained popularity immediately. The low-temperature insulation program is only applicable to small-sized electromagnetic equipment with a rated power lower than 8000w.

Among Chinese manufacturers, the level 1 power of a 3500w commercial desktop induction cooker with a single burner is about 1000w, and the level 1 power of a commercial induction cooker (3500w/burner) with 4 or 6 burners is 700w or 800w. The program of these devices is set to intermittent heating, that is, it will stop heating for 3 seconds every 3 seconds of work. The purpose is to ensure that the temperature of the food (in the soup bucket) is around 80 degrees without cooling.

This function is objectively determined by the electromagnetic principle and is a key node that affects traditional chefs from natural gas to commercial induction cookers. (No “Char” open flame)

Considering the chef’s dependence on “visual” prompts, induction cooker manufacturers have implemented technological innovations that rely on the intensity of the blue “virtual flame” of the LED display to visualize the heat of the pot.

Despite this, the chefs still use gas flames with pride. The concept of gas flame has dominated the minds of these chefs.

In China, the energy-saving technology and energy-efficiency evaluation technology of commercial induction cookers are quite mature, and the production and sales volume ranks first in the world, of which the catering industry accounts for 70%. The export business of induction cooker manufacturers is also increasing.

7 important tips for commercial induction cookers that chefs care about

Today, cost-conscious and environmental awareness is gradually covering commercial kitchens around the world. The genuine…

How to Start a Commercial Induction Cooker Business?

Due to the globalization process and China's efforts, China has now become one of the…

What are the most important factors to examine when businesses need to buy commercial cookers?…